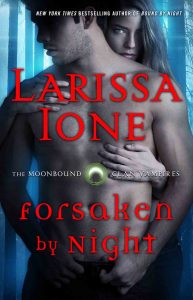 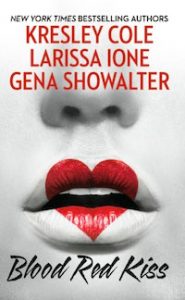 Get ready for a collection chock full of vamps, demons, aliens, and plenty of sizzle!

~ In Kresley Cole’s celebrated story “The Warlord Wants Forever,” the first in her scorching Immortals After Dark series, vampire warlord Nikolai Wroth will stop at nothing to claim his Bride, the one woman who can make his heart beat again. But can beautiful Myst the Coveted accept an enemy vampire as her own?

~ Tehya has spent the last twelve years as an accidental wolf, but is truly a vampire at heart. When she gets injured, Lobo sneaks her inside MoonBound’s headquarters and nurses her back to health…with potentially deadly consequences. Desire collides with danger in “Forsaken by Night,” a MoonBound Clan novella from Larissa Ione!

~ In Gena Showalter’s Otherworld Assassins novella, Dark Swan, Lilica Swan isn’t quite human or otherworlder; she is the best—and worst—of both. She is willing to do whatever proves necessary to save her sister from the seductive and deadly Alien Investigation and Removal agent, Dallas Gutierrez, even bond her life to his…effectively wedding him. But without consummation, the bond will fade. Can Dallas resist his insatiable desire for the powerful beauty? Or will she lead to his ultimate downfall? 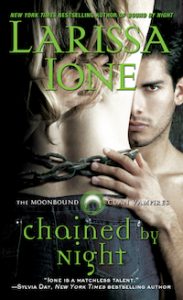 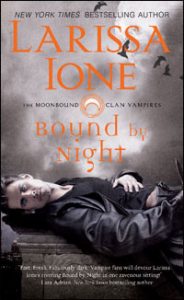 A WOMAN OUT FOR BLOOD
Nicole Martin was only eight years old when the vampire slaves rose up in rebellion and killed her family. Now she devotes her life to finding a vaccine against vampirism, hoping to wipe out her memories—along with every bloodsucker on the planet. But there’s one thing she cannot destroy: her searing, undeniable attraction for the one man she should hate and fear the most . . .

A VAMPIRE OUT FOR REVENGE
A member of the renegade vampire MoonBound Clan, Riker is haunted by demons of his own. When he recognizes Nicole and remembers how her family enslaved his loved ones, his heart burns for vengeance. But when he kidnaps Nicole and holds her in a secret lair, his mortal enemy becomes his soul obsession, his greatest temptation, and, perhaps, his only salvation—a hot-blooded lover who could heal him with her touch . . . or bury him forever.